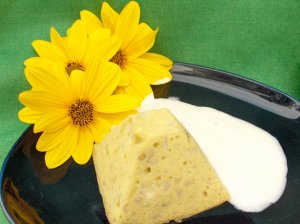 welcome to this week’s herb blogging! you are all invitade to laurie’s place

Mediterrean Cooking in Alaska!! it is a little far away..but there is place for everybody! 🙂 thank’s laurie for hosting!!

I would like to thank Kalyn for this affascinating idea! going on for almost 3 years!

do you also want to join? here you find all information. 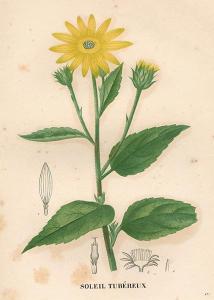 when I looked at the beautiful flowers of the topinambur in this last weeks..I didn’t know that name of this plant has had such a confusing existence!!

ok ok..let’s start from the begining… 🙂

the Topinambur is an Helianthus tuberosus…that means it is a flower from the sunflower family.

the sunflower we are used to find around is called Helianthus annus.

it is a native of the North American plains, and was introduced in Europe after the discovery of America.

the first notice about this plant we have is around 1500, and in 1616 the naturalist and botanic Fabio Colonna, wrote in his “Ecpharais” about this plant, given it the name of ” Flos Solis Farnesianus”, as a matter of fact it was grown in the Gardens of Farnese, in Rome.

The gardners called it “girasole articocco”.

probably the name articocco was given beacause of it’s taste of artichoke.

here I found two versions…one says this word comes from the Arabic “al-Karshuf”, the other

that the name was given by the french explorer Samuel de Champlain, noting that it’s taste was similar to the artichoke.

well , anyway..in one way or in the other..this root is very healty, the flowers are beatiful, the plant is a easygrowing even intrusive at time. It gets over 2,5mt..and blooms for several weeks.. when all the plant is wilted it is time to take out the root, clean it, cook it and….eat it! 🙂

chop the leek and let it wilt gently in the olive oil. (pay attention, as the leek contains sugar, it burns very fast)

peel the sunroot and cut in small pieces, add to the leek in the pan.

combine the egg, with the cheese and the flour, in a blender.

add the sunroot and the leek, mix well.

pour into 4 small forms (I used monportions in silicon, if not you should butter the forms)

(put the forms in a pan, put in the oven, and then add the water, it is easier to coop with)

mix the yoghurt with the Horseradish and put in the fridge until the flan is ready.when the flan is done, let it rest for 10min, take gently out of the form and serve lukewarm with the horseradish sauce.

see you next week! 🙂

for the Italian version: